Hi there, Human nodes and friends!

Today we are going to talk about the fee distribution and bootstrapping fund and our approach to handle them. This is a very intricate theme and there are a lot of moving parts, which will take years of empirical research to verify and assemble. We will not delve into all the details here but rather go over various postulates and afterward describe what awaits us in the near future.

To understand how the fees will be distributed we first have to grasp the difference in the approach that Humanode is taking compared to most chains out there.

There are four major plains of difference.

Most blockchains formulate fees based on the accumulated demand. More demand equals more fees. Approaches might be different, but the basic principle is usually the same. In Humanode, all nodes are equal and the specs of the nodes are usually the same, so instead of amplifying the fees based on demand, Humanode calculates the average expenses of validators and rewards the noderunners accordingly. Hypothetically it should create a stable fee system pegged to the $ expenses of human nodes.

PoS and PoW vs. PoT and PoD

In most PoS and PoW systems, the weight is defined by the power of mining equipment or the amount of stake one has. The hierarchy is defined by the sheer power of hashing power or stake. In Humanode, the weights of all nodes are equal, but there is a hierarchy based on Proof-of-Time (PoT) and Proof-of-Devotion (PoD). The more PoT and PoD one has, the higher his standing is, but the validation and voting power always stay equal. You can read more about it in the Vortex section of the whitepaper.

The one big difference is to whom the fees get distributed. Commonly, in a Static fee set, they are distributed to all validator nodes connected to the protocol. If there are accumulated fees and some mintage of the token, then they are distributed proportionally to all validators in the network. The idea behind the static fee set is that everyone gets fees if they validate transactions but when the saturation of the network is low and prices fall then the fees drastically drop for everyone and eventually squeeze out those from the market that can’t maintain nodes due to financial losses, usually targeting the smallest ones. Humanode takes a different approach through the Liquid validator fee set (LVS).

As the protocol calculates the expenses run by the validators and has an explicit hierarchy depending on Proof-of-Time and Proof-of-Devotion, the fees will be given out according to this hierarchy from top to bottom. This way, it ensures that people who have spent the most time, have the highest uptime, have proven their devotion by participating in the ecosystem development and made a proposal that was accepted by the Vortex will have their cost covered earlier than others. The bigger the saturation of the network, the more people can be incorporated into the validator fee set. Because the number of validators incorporated into this set can fluctuate depending on the saturation of the network, we call it “Liquid.”

The hierarchy persists only to determine who gets their costs covered earlier and to determine proposition rights according to the Vortex. The validation and voting power, as well as the number of fees per epoch, are always equal.

The proportional distribution of fees is the one we see in most blockchains out there. The more mining equipment, stakes, or the number of nodes one has, the more fees one gets from the system. You might have already guessed, Humanode takes the second path. The protocol ensures that there is only one human being per node. All fees that are accumulated are equally distributed among the nodes who were included in the validator fee set; thus, the distribution is equal per individual. No staking or mining of any kind.

Humanode will have a cost-based fee system with equal distribution with a liquid validator fee set based on PoT and PoD.

Now that we’ve gone through the basics let's talk about handling the fees for human nodes right now. Previously we announced a bootstrapping fund that would cover the costs of the first 100 validators depending on their longevity and uptime. To understand it more clearly, let’s look at PoT and PoD more thoroughly.

According to our original hypothesis, PoT and PoD consist of the following.

Now here is the thing. As governance is currently non-existent and we are still debating on how longevity should be calculated, only the node's uptime and participation in the development are counted to determine who stands where. Thus the team members, builders, hackathon winners, and active node runners who don’t miss epochs are more likely to get into the validator fee set. You can always receive the PoD and join the builders by developing something for Humanode or on top of it. You can read more about it here.

As there is virtually no activity on the network right now, the bootstrapping fund acts as a simulation of saturation. Imagine there is enough saturation on the network to cover the costs of 100 human nodes. We are basically simulating and experimenting on how the network would react and function if there is constant competition in PoT and PoD and if the validator fee set is liquid, depending on the amount of fees gathered.

For now, those who have a PoD will always have a higher positioning of getting into the validator fee set.

The uptime is calculated by counting the epochs in which a validator was bio-authorized. Every Two weeks starting with November 30th, the protocol has been querying the data about the Human nodes that show the number of epochs every node had been bioauthorized, producing blocks and participating in finalization. One epoch in Humanode equals four hours. There is a maximum of 84 epochs throughout two weeks that Validators can be bioauthorized in. The more Epochs you were bioauthorized in, the higher your stance and the more likely you are to receive fees.

We will gradually increase the number of Human nodes included in the bootstrapping fund every month. For now, it is set to increase by 25. Bringing a total number in January to 125, February to 150, March to 175, etc.

If there are any other fees accumulated in the network then they will be given out to the human nodes that were not included in the bootstrapping fund following the same logic mentioned above.

The amount of fees given to each human node included in the validator fee set is determined by the average costs run by validators and the number of epochs one has bioauthorized in. As there is no oracle that aggregates the average costs run by Human nodes, we have carried out a poll that allowed us to determine the average expenses and we manually set them pegged to 25$ in HMND at the presale price per month. It means that if you are included in the validator fee set and have been bioauthorized throughout all 84 epochs in two weeks, then you should receive the equivalent of 12.5 $ in HMND at the presale price. Keep in mind that if you run, for example, 80 epochs, then you will be receiving the equivalent of 11.84 $. The cost of each epoch is around 0.148 $ with linear progression.

Fee systems in various blockchains might vary significantly from one another but one thing that they have in common is that they are all intricate and have a lot of moving parts as the chain grows. Humanode has a unique prerequisite of Nodes being attached to humans and all of them having the same weight and voting power. This gave us the opportunity to approach the structuring of fees differently. The main thing is that we didn’t have to take assets held by the node runners into consideration while designing the compensation. We could orient ourselves to maximize cost-efficiency, thus the cost-based approach. Of course, as with everything in DLTs, this is an experiment and subject to change, you could argue that the traditional approach is more viable, but as we have the time to test our cost-based hypothesis, it might lead us to create a more stable and fair fee system.

(Feb 3rd, 2023) Today, Humanode announces the start of the “Humanode Bot Basher for Discord Beta test” which will begin on Thursday, Feb 9th, 2023. With the relentless uphill battle against scams, spam, bots, and Sybil resistance being a serious issue for many Discord servers and channels, Humanode has decided

Hi there, human nodes and friends, Today we wanted to go over how the pre-onchain DAO will work and highlight several critical security measures that were put in place so that the Humanode network, during its early days, is adequately secured until it matures into an established network. All of 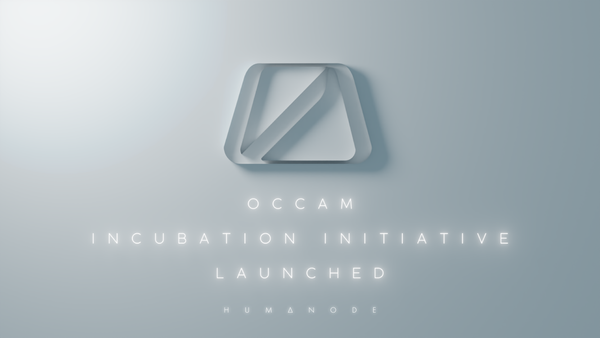 The Humanode <-> Occam Incubation Initiative is set up to help developers willing to develop on the Humanode chain become well-organized, prepared for VC interviews, complete successful funding rounds, and ultimately achieve an auspicious launch on the Humanode network.